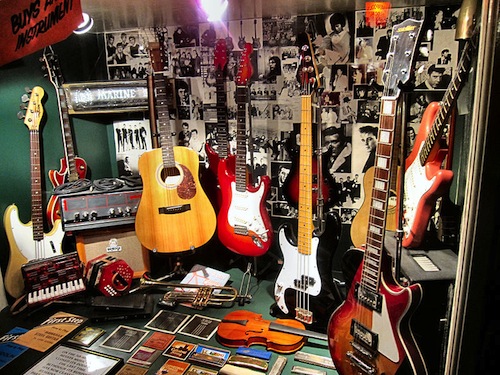 When you listen to music, there are generally multiple instruments playing at the same time during part of or all of the song.  Sometimes there might be two different instruments such as the guitar and piano, both playing the same note in the same octave at the same time.  Each instrument has a unique sound that it makes in comparison to all other instruments.  A clarinet, flute, piano, guitar, and violin might all be playing C in the same octave, but they are all very distinguishable from one another.  One reason for this is that instruments are made of different materials and are in different shapes.  The shape and materials of the instrument does affect the tone of the instrument, but the main reason instruments have a unique tone has to do with the harmonic partials associated with that instrument.  When you pluck a string on the guitar, you will primarily hear what is called the fundamental.  The fundamental is the main vibration that is happening.  If you listen very closely to the sound, you will also hear that there are other vibrations happening at the same time.  A series of higher pitches will also sound as a result of the fundamental pitch that is played.  This series of pitches is called the Overtone Series.  Every pitched sound that is made is always identified by the name of the fundamental, but each note is actually a complex series of notes all happening at the same time.  Different instruments naturally will emphasize certain pitches in the overtone series giving them a unique tone that is different from every other instrument.  The clarinet, for example, emphasizes just the odd-numbered partials, whereas the oboe is rich in all of them.  The highest partials of the piano are quieter than those of the harpsichord, and they are also more distorted, since the strings of the piano are thicker in relation to their length.  The superior sound of a full-size grand piano is largely due to the longer and relatively thinner strings, which allow more accurate partials and clearer tone.  Changes in partials are also an important part of instrument color:  Plucked string like those of the guitar begin with many partials and lose the higher ones as the sound dies away; a trumpet not, conversely can begin with relatively few partials and gain more as it progresses.

GPMA in Grosse Pointe and in Canton will be having a songwriting workshop to introduce people to the fundamentals of songwriting. During the class students will learn the pure basics of songwriting skills and use it to quickly compose songs. Instrumentalist and voice students are all welcome to join the class. Registration is available online. Sign up today!