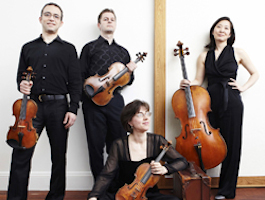 Since its inception in 1992, the Brentano String Quartet has appeared throughout the world to popular and critical acclaim. Beginning in July, 2014, the Brentano Quartet succeeded the Tokyo Quartet as Artists in Residence at Yale University, departing from their fourteen-year residency at Princeton University. The Quartet is named for Antonie Brentano, whom many scholars consider to be Beethoven’s “Immortal Beloved,” the intended recipient of his famous love confession.

Grammy-nominated composer-pianist, 2013 MacArthur Fellow and recently appointed Harvard professor Vijay Iyer (pronounced “VID-jay EYE-yer”) has been described by The New Yorker as one of “today’s most important pianists,,, extravagantly gifted… brilliantly eclectic,” and by the Los Angeles Weekly as “a boundless and deeply important young star.”

“Perfection may be an impossible goal in art, as in life, but the Brentano comes close….The performance was supple and sweeping…a collaboration of intense cohesion, which allowed the music to soar and sing as if it were being performed for the first time.”