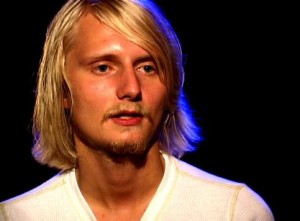 McManus was picked, over thousands of other contestants to appear on the American Youth Symphony’s television production of America’s Hot Musician, a contest formatted similar to American Idol, but with the intention of finding the best young musicians in the country.

“My drummer, at the time, told me about the show and suggested that I try out for it.,”  said McManus.  “I just decided I was going to go and took whatever money I had and bought a plane ticket and headed down there without a hotel or a ticket back. It was kind of a gamble.”

And the gamble paid off.  After passing through the first round of the competition with flying colors and flying fingers, McManus, and his unique style of guitar playing, was a hit with the judges.  He was one of ten contestants chosen to participate in the next round.

McManus, and the nine other remaining musicians, recorded interviews and short music videos while in Washington D.C.   A few months later, the finalists stayed in a home together in D.C. where they participated in various musical activities and continued to record music.  The field was narrowed to five in the final round at George Washington University.

“I was named the guitar winner,” said McManus.  “It was supposed to be one person winning and that person would get their own recording time and deal.”

It didn’t work out exactly that way, as both McManus and another contestant (a drummer) both ended up “winning” the competition.  The panel of professional judges just couldn’t decide, so both finalists were asked to play on the new single recorded by a Canadian Idol (Canada’s version of American Idol) finalist, Sarah Loverock.

The pair of musicians traveled to Vancouver, B.C. to record their parts for the song at Canadian rock star, Brian Adams’ studio.  Loverock’s singing part was recorded later then mixed with the instrumentals.

“We recorded it at the end of August last year and in the beginning of November, I got an email saying, ‘respond now if you want your golden record plaque,’” said McManus.
“Apparently it sold the prerequisite number of copies as a single in Canada.”

The release: The Dreamer, which was written by contest judge, Gregory Charles Royal, became certified Gold by the Canadian Recording Industry Association (CRIA) on November 4, 2009.  Episodes of the actual show originally aired on a Lifetime Network affiliate and can now be viewed on YouTube by searching keyword(s): America’s Hot Musician.

McManus is one of the many talented instructors teaching guitar out of the Grosse Pointe Music Academy on Mack in Grosse Pointe Park.  The school also offers lessons in piano, bass guitar, drums, violin and even offer a unique children’s music program.  The school’s owner, Henry Bahrou, tries to enlist the help of truly talented musicians as his instructors because it gives students “a real-world example of what it takes to become a musician themselves.”

“Bobby’s a shining example of the talent we have here.  He’s a great musician and an exceptional teacher,” said Bahrou.  “Which means, he could be instructing the next great musician to come out of Grosse Pointe.”

A self-taught musician, McManus attended Grosse Pointe South and began teaching guitar as a 16-year-old.  He continues to be both a teacher and a student of his craft.

“I got a scholarship to Berkley College in Boston, which is pretty much the best music school you can go to for modern music like jazz and pop music, but I’ve also done a nice job self-educating myself.”

“Other people call it “Heavy Wood,” kinda like heavy metal with the acoustic guitar.  Or, “hand-style acoustic” because you’re using both hands to touch every part of the guitar.”

Whatever it’s called, it can now be referred to as “gold.”