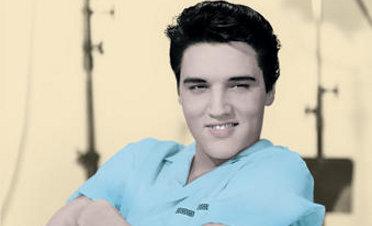 Most of the maintenance on the collection, which Baxendale estimates is less than 25 guitars, is “general,” he said. Baxendale will set up a workstation in a warehouse on the Graceland property so that the treasures can stay close to home, reports the Athens Banner-Herald.

“I’d hate to be responsible for transporting Elvis’ guitars,” said Baxendale, who described himself to the Athens paper as “Elvis’ posthumous guitar tech.”

Baxendale was selected for the job by a musician close to the Presley family.Michael Lockwood, married to Presley’s only daughter Lisa Marie since 2006, found out about Baxendale’s conversions of antique 1940s Harmony guitars for Nashville musicians.

The Banner-Herald notes that becoming Elvis’ guitar librarian isn’t the only piece of good news Baxendale has received recently.

Baxendale will head to New York in February for an awards luncheon. If he wins, he’ll then travel to Scotland for a two-week residency at the Belvenie Scotch distillery, the sponsor of the awards.

The nomination, he thinks, is mostly due to the luthier school he runs here in Athens, but “I have a feeling the Elvis thing will help me out with that,” he said.

Winners will be announced in February.