The key of C major, also called the C major scale, is a commonly used key for guitar players, piano players and other instruments.  It is easy to teach the notes of C major on the piano because all of the white keys make up the key of C.  Diatonic and Chromatic are words used to describe scales and other parts of music.  If you play all the black and white notes on a piano, this would be called a chromatic scale.  Diatonic scales are usually 7 note scales that exclude 5 notes from the chromatic scale in order to achieve a desired effect.

The key of C major is a diatonic scale consisting of 7 different notes.  Chords are groups of notes derived from a scale.  There are different ways to group notes to form chords.  The two most common types of chord groupings are triads and seventh chords.  Songs written in a certain key such as C major have a tendency to play only the notes in that scale.  This is a tendency and not a hard rule in music.  Many songs and styles will venture outside of the key in order to achieve a desired sound which cannot be found using the diatonic notes.

Those that are new to music theory will benefit from spending time with diatonic notes, and chords before venturing into the chromatic notes that fall outside of the key.  If you master the diatonic functions of the scale first, it will be much easier to learn alterations using chromatic notes.

Be sure to download the free Key of C Major chart by clicking the link below.  Also be sure to check out my previous posts on the Circle of 5ths and the Nashville Number System.

Have comments or suggestions?  Please leave us your message in the comment section below.  Thanks! 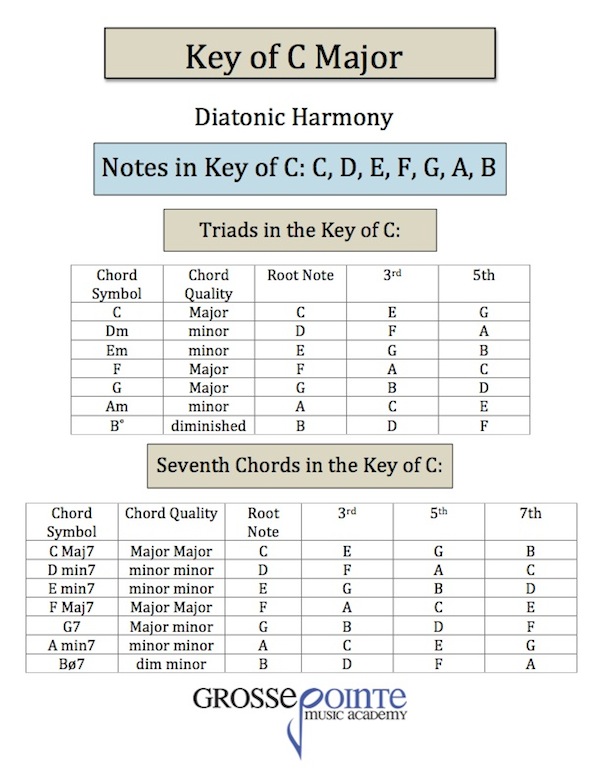