The Nashville Number System is a simple way of naming chord functions as numbers rather than their formal letter name.  In the equal temperament tuning system their are 15 key signatures.  They all differ in name but the chord function is always the same.  For instance a guitar player might be teaching his band a new song and will yell out “play a 1, 4, 5, 4 in the key of C”.  If you have some background music theory you would know that means play C,F, G, and F.  If you play a 1,4,5,4 in the key of A then the chords will be A, D, E, D.  You can use the chart below to transpose the 1,4,5,4 pattern to any given key.

According to the wikipedia.com article on the Nashville Number System, it was developed by Neal Matthews Jr. and then further developed by Charlie McCoy.  This system is clearly based from the figured bass system from the Baroque music era.  The figured bass system uses roman numerals to indicate the chord function.  Roman numerals can appear as lower case or upper case.  This is quite useful because upper case is used to denote major chords while lower case represents minor chords. 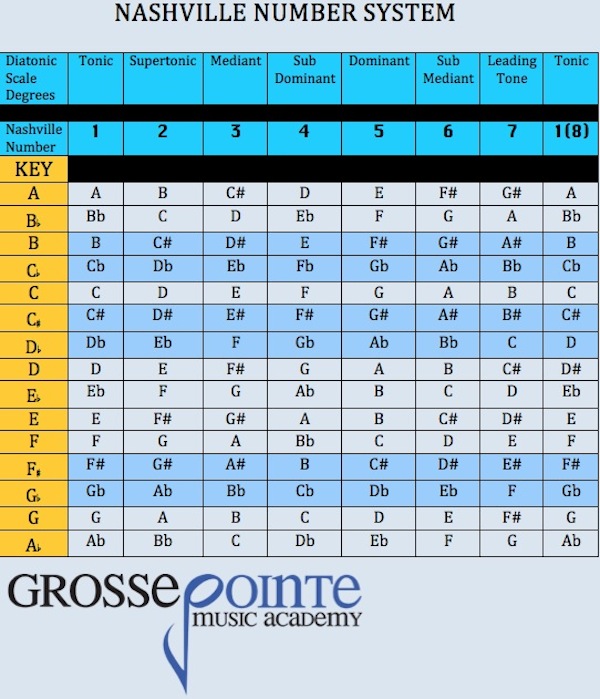 The Nashville Number system does require some understanding of music theory.  Many students will avoid learning theory because they don’t believe it’s going to help their playing.

1.  It’s much easier to learn new things when you have a name for everything.  Music theory names all the functions of melody and harmony.

3.  Balance your physical practice with the mental gymnastics that is music theory.

4.  It’s much easier to play along to other musicians and recordings.  Learning songs becomes quicker and quicker.

5.  It’s fun once you’re good at it!
Thanks for checking out this post.  Be sure to download the free pdf chart and I welcome your comments!