It’s 2:30 on Tuesday afternoon, and the workroom of the Roberto-Venn School of Luthiery is alive with sound: hammering noises, scraping, footsteps. Students move from workbench to drawers against the wall, outside to sand down a guitar neck or body, back inside to the sink, around again to the workbench. 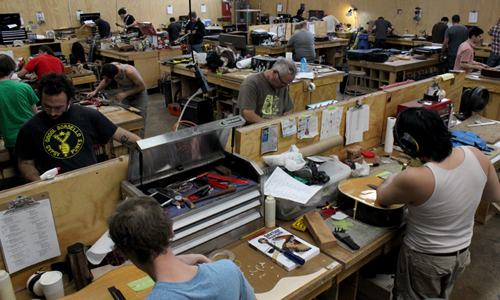 For the previous five months, the students at Roberto-Venn, which is located on Grand Avenue, have been studying from 8 a.m. to 6 p.m. every weekday, learning the skills to make a guitar. Luthiers make and repair stringed instruments, and Roberto Venn School of Luthiery is the longest-running guitar-making school in North America, according to the school’s director William Eaton.

The students have finished building their instruments for the course — one acoustic and one electric guitar each, though some have also built a third. On Thursday from 5-7 p.m., they will showcase the instruments they’ve made; on Friday, they graduate.

Eaton has been working with the school for about four decades. It started as an informal build-your-own-guitar workshop called Juan Roberto Guitar Works in the late 1960s with the inspiration of John Roberts, a former lumber company pilot who harvested leftover wood with the original intention of building a yacht. Eaton wrote a business plan for the school while in college, and in 1975, the school became accredited — ready to prepare students for a career as a luthier.

“It’s occupied most of my life,” Eaton said. “It’s been a long and wonderful adventure for me.”

The school has now produced more than 2,000 graduates and has taught students from every continent except Antarctica, Eaton said.

Bart Applewhite was a student who graduated in 1993. After he graduated, he hung around making instruments, and eventually he started working with Roberts, where he stayed for two years. He left the school to tour with a band, but in 2001 he came back to work in the office, where he remains today.

“It doesn’t feel like work,” Applewhite said. “It feels like endless possibilities for creativity. Sometimes it feels like perseverance from the students … and also it’s a lot of exuberant feeling.”

One thing Applewhite loved about the school was the way it connected him with the other students, something he said he still sees today.

“There’s such camaraderie between the students,” Applewhite said. “There’s something that happens when you’re a student. You’re together five days a week, 10 hours a day.”

One example, Applewhite said, was when he was a student, they would play “So What’cha Want” by the Beastie Boys every day in the half-hour before class was over and they had to clean up.

“People started to get mad, and we had to hide the CD,” he said. But, without fail, “So What’cha Want” would play before class ended every day.

Current students such as Gary Long, who came to Roberto-Venn from central Pennsylvania, shared Applewhite’s enthusiasm.

Long was testing the dimensions of a wooden tailpiece he made for his electric guitar on Tuesday. He worked alongside Dylan Sandusky, a student from Texas who was making a nut — a piece that holds the strings in place between the tuning pegs and the neck of the instrument — for his bass, and Albert Goenner, a recent high school graduate from Maryland, who was removing the frets from the neck of his acoustic guitar to replace them and clean up the fretboard.

It’s true, there is a camaraderie between the students. Long made a joke, and Sandusky chuckled. Goenner held up his guitar with a pencil stuck under the strings and strummed.

“You don’t need a nut. You can just use a pencil!” He quipped.

These students are here with the hope of becoming luthiers when they leave the school. They have just a few more days to go.

Thursday’s show, which will feature the students’ instruments in the front gallery of Roberto-Venn, will also have a 45-minute concert by New West Guitar Group. Eaton emphasized that the performance is another gift for the students — the night is really all for them.

Jeff Stein of New West Guitar Group said he was looking forward to seeing the students’ instruments in the gallery.

Eaton is most passionate about the transformation that happens to the students. For these students, he said, making guitars is not a hobby — they are coming to the school to learn a profession.

“It’s been really satisfying and gratifying to watch the students and the experience they have,” Eaton said. “I know, from watching this over and over again, that it’s a life-changer.”