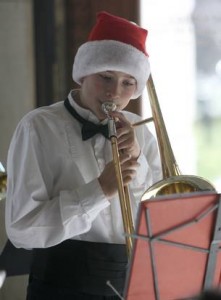 While many would argue that the study of music should be part of a well-rounded education, the matter is still somewhat controversial. Research led by Frances Rauscher and published in Nature in 1993 showed that listening to the music of Mozart improved performance of certain mental tasks. However, press reports of more recent studies in this area have questioned the credibility of the so-called Mozart effect and suggested there is no measurable benefit of including music programs in academic curricula.

These studies have been used as weapons in school budget battles, cited to argue against the continuation or expansion of existing music programs or the introduction of new ones. As schools increasingly focus on ensuring that students have the “21{+s}{+t}-century skills” needed to succeed in life, musicianship is often not among the list of talents deemed most important. This approach is simplistic and when used to dismiss the benefits of music education completely misses the point.

School music programs are important for many reasons.

Numerous studies have suggested a link between music training and academic achievement. For example, a review conducted in 2013 by the Center for Education Research and Innovation concluded, “Music lessons improve children’s academic performance and their IQ, and improve phonological awareness and word decoding.”

Music can serve as a vehicle for self-expression, giving a voice to a child who might otherwise go unheard. Musical performance helps students learn to carry themselves with poise and confidence under pressure, and teaches teamwork and cooperation — all critical skills that will stay with young people for the rest of their lives.

Participation in an instrumental or choral ensemble is an excellent training ground for learning to work with others toward a common goal. For example, in a youth orchestra with dozens of members, it is crucial that all maintain a high level of concentration, carefully listening to one another and watching the conductor. Each musician must learn to play his or her own part well, but only when individual parts are combined with precision and sensitivity does the music of the ensemble emerge. This requires consistent practice, intense focus, and significant collaboration. In the words of one of my own music teachers, music is the ultimate team sport.

However, despite ample evidence of the academic, psychological, and interpersonal benefits of music education, its supporters seem to be held to a standard that proponents of other disciplines or extracurricular activities often are not.

It is often taken for granted that math, English, science, foreign language and history are essential elements of a high-quality education. Athletics build discipline and teach the value of teamwork. Yet, it seems that supporters of music education are asked to provide evidence of its value (evidence that is often then subjected to intense scrutiny and at times misinterpretation) while advocates of other disciplines and activities are not.

Despite music’s benefits, funding of music education in our country has been inadequate. A recent Department of Education report summarized the results of a comprehensive survey of teachers in the United States. Music specialists were asked whether support in 10 different areas was adequate. There was not a single area in which more than half of the teachers found funding to be “completely adequate.” In fact, across all 10 kinds of support for music, only 25 percent of the teachers rated support “completely adequate.”

Discussion of what should be taught in schools often includes assumptions about the skills that today’s students will need to be successful in the future. Yet, predicting precisely society’s future needs is difficult. A new technology might be developed and as a result skills that were once thought to be essential can become insignificant. It is hard to determine years beforehand which country will become a major economic or political force requiring knowledge of its language and culture.

However, it is certain that self-assured individuals who appreciate the benefits of hard work and who are disciplined, responsible, and able to collaborate and cooperate with others will always be in high demand. And, it is equally certain that music education is an enormously effective way to promote and enhance such qualities in young people.

Music has been found to exist in every known culture. It can teach students the skills they will need to thrive in the 21st century and beyond. Since these skills will always be critical to an individual’s success in society, so too should robust involvement in music be an integral part of every child’s education.

Amanda Siegel is a junior at Rocky Hill School, in East Greenwich, and plays flute in the Rhode Island Philharmonic Youth Ensembles and All State Band.