You are here: Home / Archives for Event

The Detroit Symphony Orchestra recently arranged a flash mob at Ikea to promote its new Neighborhood Concert series in Canton. 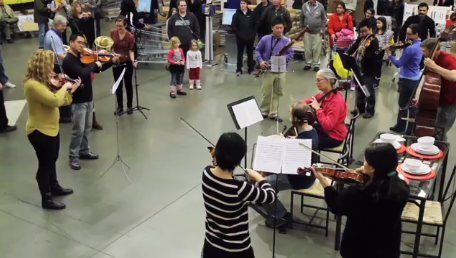 Videos of orchestra flash mobs have been taking the internet by storm, but recently Canton Ikea shoppers witnessed it with their own two eyes and ears.

About 20 members of the Detroit Symphony Orchestra (DSO) arranged a flash mob inside Ikea on Jan. 12 to promote its newNeighborhood Concert Series in Canton.

Shoppers gathered around, many taking photos and videos with their smartphones, as the DSO brightened up the wintery day with Beethoven’s “Ode to Jöy.”

“We were thinking ‘what do people do in Canton? What is Canton known for?’ And people travel from all over southeastern Michigan to go to the Ikea in Canton, so it just seamed like a natural fit for us,” Poshadlo said.  “We called the Ikea and asked if they would be interested in collaborating in some sort of performance and they were really responsive.”

A video of the performance was posted to YouTube on Jan. 23 and already has more than 19,000 views as of Monday.

[Watch the video above]

The DSO Canton Series is a four part concert series. The flash mob performance took place the weekend before first concert, on Jan. 17. The next three dates are schedules for March 14, May 9 and June 20.

All the concerts are at 8 p.m. at the Village Theater at Cherry Hill.

This is the first year Canton has been added to the DSO’s Neighborhood Concert Series.

“We’ve done a couple of Chamber recitals there (Village Theater) before and the musicians really like the venue, it’s a high quality space,” Poshadlo said. “We’ve had really good audience response there also so we decided to make it a full concert series.”