Yesterday I gave you my thoughts on whether to start on acoustic or electric guitar as a beginning player.  Instead of just saying you should start on acoustic, I rambled off 400 or more words so that my blog would be effective for online search engines.  While I gave my opinion that I think everyone should start on acoustic, the truth is that many will start with electric anyway.  If you’ve made the choice to start playing guitar with an electric guitar then here are some things you should know:  First thing is that cheap beginner guitars often look a lot like the pricier higher end guitars but don’t usually sound like them.  If you’re interested in quality tone make sure to take an experienced guitar player with you shopping so that you can hear the difference.  Often times spending a little bit more will get you something that sounds a whole bunch better.  A really good player can make cheap guitars sound good but listen to them play the same tune on each and you’ll be sure to hear a difference.  Electric guitars have pickups which are essentially microphones for the strings.  There are cheap microphones and expensive microphones and the same holds true for guitar pickups.  There are many options for pickups but the nicer ones are generally described as having a warmer, clearer, and more distinct tone.  Electric guitar tone is also influenced by the type of wood that a guitar is made from.  Those using more precious woods will naturally be more expensive.  A cheap guitar that retails at 100-200 dollars will generally be made of cheap wood, cheap hardware, and cheap pickups.  Cheap electrics can make a good learning tool but don’t expect to hear the sweet tone that you do when listening to your favorite recording artists.  Amplifiers will play a huge role in the way your guitar sounds also.  Amps come in many sizes with many different features.  This adds complication and cost to your initial experience with guitar.  You can play electric guitar without the amp but it’s typically too quiet to motivate anyone to play.  Home practice amps with decent tone can be bought for as little as 60-100 dollars.  If cost is not an issue and you’re serious about playing guitar, buy something that is at least an upgrade from the beginning level guitars on the market.  You’ll be happy you did once you start having success with your playing.  If you want to be a good player you’ll have to put all of your focus on playing the guitar rather than the guitar itself.  Like I said earlier, a good player can make a cheap guitar sound great.  Become a good player and then worry about what you’re playing. 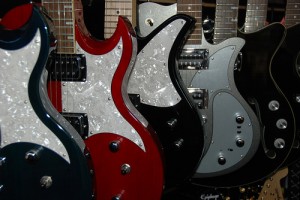