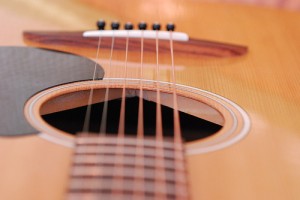 Frets are metal strips (usually nickel alloy) embedded along the fretboard (also called fingerboard) and located at exact points that divide the scale length in accordance with a specific mathematical formula. When a player presses a string against a fret it shortens the vibrating length of the string, thus changing the pitch or note that is heard. Frets are laid out so that each consecutive fret’s placement defines a half-step interval resulting in what is known as a chromatic scale. Fret placement is determined by a mathematical proportion that results in equal tempered division of the octave. This means that there are twelve semi-tones to an octave, and the twelfth fret will be the octave of the note that the open string is tuned to.  In practice, luthiers determine fret positions using the constant 17.817, which is derived from the twelfth root of two (17.817 = (1-2-1/12)−1). This math is based upon the work of Pythagoras, who determined that if you take a vibrating string and divide it into two halves you could achieve the octave of the original note produced by the string. Pythagoras is accredited with the discovery of both harmonics and the diatonic scale. In all probability, Pythagoras actually worked out his theory of harmony from the monochord, a contrivance consisting of a single string stretched between two pegs and supplied with movable frets. However he discovered the basis for his work, Pythagoras’ theory lives on in fretted stringed musical instruments.

Since frets are usually made of nickel alloy, which is a softer metal, they tend to wear and require replacement. Not unlike the tires on your car, frets continue to function as they wear, so it may take some time before the degradation becomes noticeable. Eventually the playability and feel of the instrument will degrade to the point that it does become noticeable. The most common symptoms of fret wear are buzzing and decreased playability, but because fret wear proceeds so slowly, it may take a long time before the player notices the change. Usually, the wear will become visibly noticeable under the first and second string of the regular guitar first. This is because the steel used for the strings are harder than the nickel that is used for the frets. It takes longer to wear the frets under the other strings, because they are wound with either brass or bronze, which are both softer than the frets. There is an exception to this tendency for players who often use capos, as a heavy capo user will tend to wear out their frets more rapidly, and more evenly under all of their strings. Just as you notice the improved “handling” when you replace the tires on your car, you’ll notice your guitar playing much better when worn frets are replaced. Some players are more sensitive to this feel and may chose to replace their frets more frequently than others who are less sensitive.

It is difficult to say exactly how long one should go before replacing the frets on their guitar. The pressure applied on the frets by the player varies greatly between players and styles. It really depends on how you play. If you play your guitar one hour a year (unlikely), you could never wear out the frets, but if you play one hour a day, you probably will. It’s not uncommon for a professional guitarist who plays a nightly gig to wear out a full set of frets in a year. If you have high action and a hard grip, you’ll wear frets a bit faster. If you “choke” or “bend” notes, you’ll scrape the skinny steel strings across the frets and wear them much faster. While frets can be leveled a few times before requiring to be replaced, eventually they are going to wear to the point that even the most skilled repair technician will not have enough metal wire left to level. At that point, they will require replacement. This is usually the point where the fret height is one third as tall as it was when installed. Most people will probably have to replace their frets every ten years or so. A professional musician will have to replace them more often.