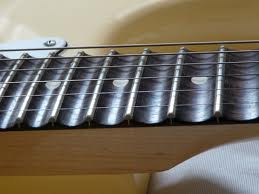 Scalloped frets are most commonly used by “shred guitarists.” The concept is that by “scooping out” a portion of the fingerboard wood between the frets, the players fingers then never make contact with the wood, thus eliminating friction between the guitarist’s finger tips and the wood. This allows the player to run scales with more ease, therefore allowing them to play faster. The scallops are filed out from between the frets forming a U shape either for the entire length of the fretboard, or on specific frets, usually the last four. We would refer to only the last four being scalloped as being a partially scalloped fingerboard. Another popular format for scalloped fingerboards is called half scalloped, and is when scalloping begins on the twelfth fret and covers the rest of the fingerboard. Scalloping is usually done in the factory with a specialized machine that has separate files for each fret. In a repair situation scalloping can be done, but is very time consuming, so it can be quite expensive. It is recommended that a player spend some time with a guitar with scalloped frets before having the procedure done, as many guitarists who are not used to scallops tend to find the instrument much more difficult to play. Scalloping the frets of a guitar also makes it possible to make rapid micro-tonal variation, which is important in Indian music. For this reason, John McLaughlin used a fully scalloped acoustic guitar when he played with the band Shakti. However the most notable player who uses a scalloped fingerboard is  Yngwie Malmsteen. Richie Blackmore of Deep Purple is also known for playing with scalloped frets.  Ibanez JEM series guitars, designed and played by Steve Vai, come standard with the last 4 frets scalloped. In 2008 Ibanez made available their E-Gen model, a Herman Li signature, which includes four scalloped frets (21st to 24th). Karl Sanders of the death metal band Nile also uses several guitars with scalloped frets, including several Deans, and KxK Guitars. It is important to be aware that inlay is also effected by scalloping, so it would be unlikely that a player owning a heavily inlayed guitar would have the process done.  Simple dot or block markers are usually safe. A common misconception about scalloped frets is that they can be used to produce full chord bends. It is a great idea on paper, but in practice it simply doesn’t work.