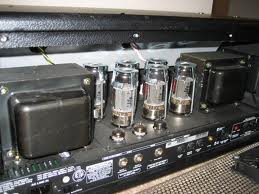 When should you get your amp looked at by a professional?  Is your amp
making odd noises every time you pick? Do your controls crunch when you turn
them? Does your speaker squak instead of speak?  Does a slap on the side
improve your tone? Do you have to knot your cord around the handle to have
it stay in the input jack?  Is it half as loud as it used to be?

Generally, guitar amplifiers don’t need much maintenance. They go on working
fine for years, and solid state amps maybe centuries. Nevertheless, eventually dirt can get
into the controls, and the heat cycling of the components causes part failure.
There’s nothing worse than being at a gig and having the amp that’s earning you money become stubborn about doing its job.

What kind of maintenance program should you have?  With solid state
amplifiers, no regular maintenance is needed unless you have an issue with
the amplifier.  If you have an amplifier that is all tubes or a hybrid (tubes
and solid state), under normal usage you should have the tubes replaced and
the amp checked out by a qualified technician once a year.  If the amp gets
heavy usage such as 20+ hours a week, its tube life will be even less.  Yes, you
will hear people bragging about how great their tube amp sounds, and that
they haven’t changed the tubes in years, but the degradation of sound in tube amps,
barring a complete failure of some component, is slow, so to the user it
may not be perceived unless you park it next to a new or freshly retubed
and recapped amp to do a comparison.  I recently had a 70’s Fender
Vibrolux Reverb amplifier come in that didn’t sound bad, just a little thin.  After
replacing the worn out components and the tubes, when the owner came to pick
it up, he struck one chord and said, “Yes, this is the amp I’ve been looking
for!  I didn’t know I had it in hand!”  He left smiling and called me
back the following day, still beaming about how good his “new” amp sounded.
Another reason for service in tube amplifiers is getting the bias on the
power tubes reset. As the tubes and components get old, their values change
and the bias will drift, making your amplifier sound cold and “heartless,” or
glowing your power tubes red, shortly ending their life.  The bias on the
output tubes should be checked every six months on an amp that is used
regularly.  For my best customers, I have them over with their guitars and
let them hear the amp while I adjust the bias, so that we can obtain the optimal
setting that won’t destroy the output tubes and has that “killer tube sound.”

The cost of a little maintenance on an amplifier is far less than the cost
of replacing it, and in a few years, you will find that your amp has retained
a lot of its value or even has grown in value if it has been maintained properly.