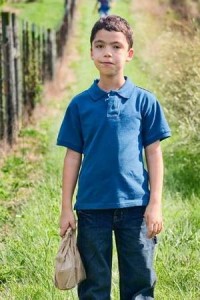 The staff, parents, students, and friends of Grosse Pointe Music Academy have been invited to a free concert by the producers of a movie starring Ethan Bortnick.

I received a call this afternoon from the movie set of Ethan Bortnick’s new film.  He is having a concert at the Redford Theater on Thursday September the 8th at 7:30pm.  The concert will be filmed for the indie movie starring Bortnick.  Read below for more information on the film and Ethan from her September 2nd Article in the Detroit Free Press.

The Code “IGA Approved” will get you through the door Free of Charge.

When he’s not playing Pokemon video games, swimming or reading about mythology, Ethan Bortnick is busy this summer with another activity.

The 10-year-old music prodigy from Florida is in Detroit to play the lead role in “Anything Is Possible,” a small-budget independent film that’s being produced locally.

“It’s just so much fun making the movie and I want to inspire a lot of people,” says Ethan, a polite young boy who has met stars like Justin Bieber and Beyoncé on his show-business journey.

Ethan’s gift for the piano emerged when he started playing by ear at age 3. By age 5, he was composing.

He has made several appearances with Jay Leno on “The Tonight Show” and was featured on an episode of “The Oprah Winfrey Show” about the world’s smartest children. The youngest performer on the star-filled “We Are the World — 25 for Haiti” project, he also had his own PBS special and in July was a headline act at the Las Vegas Hilton.

Now Ethan is trying out his acting skills by playing a young boy who’s separated from his mother when she goes missing during a trip to Japan to help after the tsunami.

The movie explores issues like homelessness and adoption, while giving him a chance to show off his other talent.

“I cowrote the music and I might be scoring the film,” says Ethan, whose parents and 5-year-old brother, Nathan, accompanied him to Detroit.

Gene Bortnick, his father, says his son cowrote several songs for the movie and recorded them in Muscle Shoals, Ala., working with songwriter Gary Baker of “I Swear” fame.

“We believe no (other) 10-year-old has starred in, scored and written the songs for a movie,” says his dad.

On Belle Isle this week, Ethan filmed a scene for the movie that involves his character’s search for a homeless man (played by David Haines, an actor and movie double for Will Smith) who helps him find shelter in a safe house.

Director Demetrius Navarro says Ethan is a natural at acting. “The beauty of Ethan is that he knows there’s an emotion associated with it. Being a songwriter, his talent is associated with emotion.”

Pastor Marvin Miles of Ecorse’s International Gospel Center is the executive producer of “Anything Is Possible” and the person who put the project together. He first met Ethan at WMXD-FM (92.3) early this year when the young pianist was a guest on Frankie Darcell’s show.

Miles had worked with Navarro and “Anything Is Possible” cowriter Carlos Bermudez on a previous film, “Silent No More,” about women facing domestic abuse.

Navarro, an actor and director who had a regular part as a paramedic on “E.R.,” and Bermudez wrote the screenplay in about a month and a half.

“When Pastor said he wanted to do (filming) in August, Carlos said, ‘Oh, you mean August 2012?’ ” says Navarro, joking about the speedy process.

The “Anything Is Possible” cast also includes Kym Whitley (“Next Friday” and “Along Came Polly”) and Jonathan Bennett (“Van Wilder: Freshman Year” and “Cheaper By the Dozen 2”).

Miles plans to submit “Anything Is Possible” to festivals and hopes for a domestic and international release around Easter.

On Thursday, Ethan will give a concert at the Redford Theatre that will be filmed for the movie, with a portion of the proceeds going to several charities, including the Children’s Miracle Network, one of many he helps. He’ll play several of his compositions and, as with his other performances, invite people onstage and take questions from the audience.

Describing his concerts, he says, “We have fun, we party, we hug and dance.”