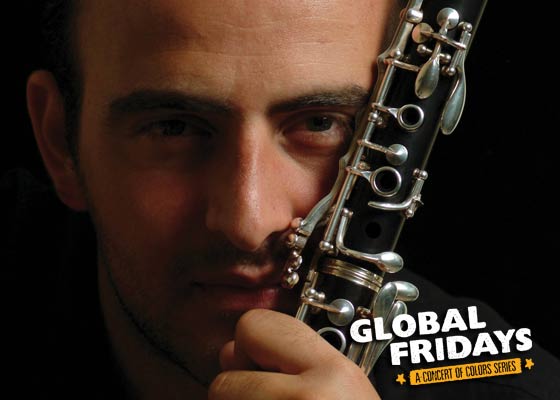 As a soloist and composer, Syrian clarinetist Kinan Azmeh and the Kinan Azmeh Quartet has traveled the world, electrifying audiences in Paris, London, Berlin, Moscow and Damascus. His eponymous ensemble, formed in 2006 in New York City, gained immediate recognition for its virtuosic, high-energy performances, including praise from The New York Times. The Quartet strikes a creative balance between western and Arabic classical music, jazz, and the music of Syria. Azmeh’s expressive clarinet can soar above the rhythmic underpinnings of Kyle Sanna’s rustic guitar and the dynamic texture of John Hadfield’s percussion and Josh Myers’ double bass. At other times, Azmeh displays the utmost delicacy of phrasing and tone, with spare accompaniment. A truly outstanding ensemble at the top of its game.

Described as a “virtuosic, unique sound” by the Daily Star and “Engagingly flamboyant” by the L.A Times, Kinan Azmeh is gaining the reputation of being on of Syria’s new rising stars.

Born in Damascus, Syria 1976, Kinan is the first Arab to win the first prize at the Nicolay Rubinstein international competition in Moscow, Russia, 1997, a graduate of the Juilliard school in New York and the High institute of music and the Faculty of Electrical Engineering in Damascus, Syria, He is currently working towards his doctoral degree at the city university of New York studying with Charles Neidich. Kinan has appeared as soloist and composer worldwide, such appearances include Opera Bastille in Paris,
Tschikovsky grand hall in Moscow, Carnegie and Alice Tully halls in New York, Royal Albert hall in London, Teatro Colon in Buenos Aires, Berlin Philharmonie Hall, The Kennedy Center in Washington DC and the
Damascus Opera house for its opening concert. He has played under reputed conductors such as Solhi al-Wadi, Roger Norrington and Daniel Barenboim, and shared the stage with artists such as Mari Kimura, Marcel Khalife, Elliott Sharp, Katia Tchemberdji, Kani Karaca and Kevork Mourad. Compositions include several works for film, live visual arts, Solo, Orchestra, chamber music and electronics and his recordings include two albums with
his ensemble HEWAR, and several sound tracks for film and dance. Kinan is the artistic director of the DamascusFestival Chamber Music Ensemble.

Guitar Passions at The Music Hall in Detroit February 18th