Made in Detroit: Guitars crafted from city ruins

DETROIT — Detroit has more than 70,000 abandoned buildings. Among them is an old Cadillac plant that houses piles of wood. Where others see trash, Mark Wallace sees buried treasure.

Wallace started making guitars out of Detroit’s reclaimed wood a year and a half ago. He not only enjoys making the instruments but also playing them.

“It feels great, as an instrument. It’s also great to know that it’s something I built and something that came out of the city of Detroit,” Wallace told me. 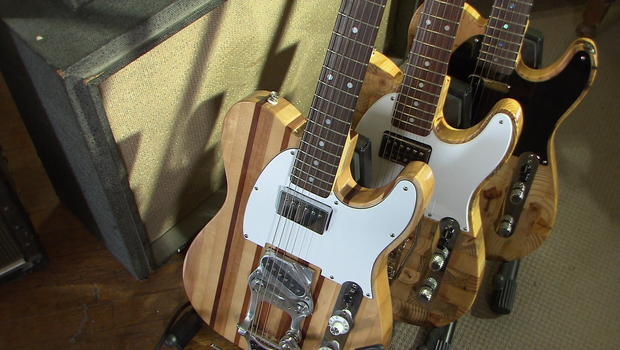 Decades ago the wood for the city’s buildings came from old growth forests where trees grew slowly. Wallace says the lumber has tight grain patterns and provides great resonance and sound.

Each guitar is meticulously hand-crafted and is as unique as a fingerprint. Wallace has made 24 so far and hopes eventually — with a team of craftsmen — to produce a couple hundred a year. They’re priced at about $2,000 apiece.

Wallace says he gets an amazing feeling out of taking wood that’s been tossed as garbage and turning it into something as beautiful as his guitars.

He says the guitars are a tribute to Detroit’s rich music history from Motown to classic rock to rap.

With his work Wallace is transforming remnants of the city’s past into a symbol of hope for the future.