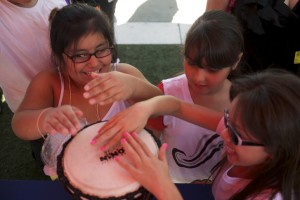 The move will double the amount of music instruction currently available.

In an article published last month, the newspaper noted that the PTA at Longfellow Elementary gave $20,000 to the school for students to learn music. The money came from $45,000 that the PTA raised during an October jog-a-thon.

The article, written by Nadra Nittle, said about three-quarters of the district’s students get only one day of music instruction per week.

Longfellow Principal Laurie Murrin said that the school’s stakeholders have traditionally supported all forms of art and praised the PTA for enriching arts instruction for students. Longfellow “always had a very strong choral music program,” thanks in part to the active group of parents there, said Murrin, now in her third year as principal.

Parent-teacher associations fill the arts education gap in many schools.

What kind of arts education instruction does your school offer? KPCC is surveying school districts in Southern California. For details, contact Mary Plummer at mplummer@kpcc.org.

Music in our schools