Music app could be source of therapy for Parkinson’s, researchers claim Tuesday, January 14, 2014 By Fiachra Ó Cionnaith Irish Examiner Reporter The move has come as part of a €3m international study led by researchers at the National University of Ireland, Maynooth. After finding a connection between musical rhythm and physiological changes in the […] 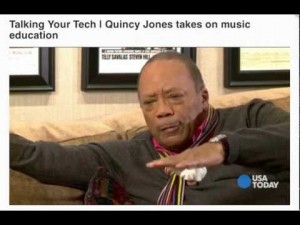 Brittney M. Walker Eurweb.com July 28, 2013   Playground Sessions *Quincy Jones is crossing over into music education. He and Chris Vance  are co-creators of the music edition of a Rosetta Stone type learning software called Playground Sessions. The new application will help children and adults learn how to read and play music by understanding the basics of piano playing. “The concept […]