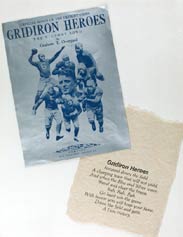 (verse)
Hail the colors Blue and Silver let them wave.
Sing their song and cheer the Gridiron Heroes brave,
Fighting for fame, winning the game,
Dashing to victory as they go.
(chorus)
Forward down the field,
A charging team that will not yield.
And when the Blue and Silver wave,
Stand and cheer the brave.
Rah, Rah, Rah.
Go hard, win the game.
With honor you will keep your fame.
Down the field and gain,
A Lion victory!
GO LIONS!

The Lions fight song, entitled “Gridiron Heroes” dates back to the late 1930’s. When the team become a part of Detroit, owner G.A. Richards called for a fight song. Wayne State University director of bands Graham T. Overgard, who was also the Lions director of entertainment, penned the lyrics and music to “Gridiron Heroes-The Victory Song of the Detroit Lions”.

Still one of the oldest team fight songs in the NFL, Gridiron Heroes is still played after every Lions score. The tradition has been carried over to Ford Field where boisterous fans are singing along after the home team scores.

I often sit and wonder what would football be without music.  What would movies, TV shows, or anything be without music and the arts?  Music is pretty much the glue of the universe.  Without music we would all just fall to pieces.  High School football and College football teams all have a strong presence of music from their marching bands during the game, at half time and after the game.  Team fight songs are especially prevalent in college and professional football programs.  Many of these songs have an interesting history behind them.  A song older than “Gridiron Heros” is “The Victors”, the fight song of the University of Michigan. It was composed by UM student Louis Elbel in 1898 following the last-minute football victory over the University of Chicago that clinched a league championship.  John Philip Sousa is quoted as saying The Victors is “the greatest college fight song ever written.” First performed in public in 1899, “The Victors” did not catch on right away, and did not become Michigan’s official fight song until many years later. At the time, the song “There’ll Be a Hot Time in the Old Town Tonight” was considered to be the school song.
Most fight songs are usually very basic musical compositions of melody and harmony.  Learning to play your favorite team’s fight songs on your instrument can be fun an entertaining way to practice and learn music by ear.
posted by Grosse Pointe Music Academy staff