You are here: Home / Archives for Electric Guitar Lessons

Ok, so I don’t know what possessed me.   Well, actually, I do:  It’s called Summer Vacation.  This is the time when us at-home RkrMoms (Rocker Moms) need to find something to entertain our kids so they don’t end up [{in the basement} on the street, {playing video games} getting into trouble.

Without summertime activities, the five Grosse Pointes might be rife with bands of madras-plaid shorts and Abercrombie shirt-wearing tweens and teens roaming willy-nilly around The Village.  And we just can’t have that, now can we?  No we can’t.  In fact, I believe willy-nilly is specifically prohibited local ordinance.

With this in mind, I invite you to venture back in time with me for a moment:  it was almost the spring of 2009. And, with winter lasting a full 6 months here in Michigan (come on, you know it feels that long!), I eagerly awaited the change of seasons.  As a sure sign of spring and approaching summer, the mail slot in my front door began to burst forth with postcards, flyers, glossy pamphlets and colorful catalogs touting all sorts of wonderful  things to spend our money on so that our one-and-only son would be occupied (and not willy-nilly) during his summer break.

Here in Grosse Pointe we are fortunate enough to have an organization called the War Memorial, and I always keep my eyes peeled for their catalog in particular.  According to their web site, http://www.warmemorial.org/, the War Memorial is “a center for enrichment in honor of veterans” which is “used for a variety of programs that focus on dance, art, music, theatre, health and enrichment as well as a multitude of children’s and youth programs.”  Now, I know I can be a tad tongue-in-cheek at times (who, me?!) but seriously, this place offers some great classes.  I have taken yoga there, attended a superb lecture on art history, and the next time I get a dog from the Grosse Pointe Animal Adoption Society, this is the place I will bring it for puppy preschool.  Plus, it is housed in a sprawling mansion built in 1910, on lushly landscaped acreage, complete with fountains and reflecting pool. So, when I saw “Rock Band, Jam Camp” listed on page 7 of the catalog, I about peed my pants!  YES!!  HOW COOL!!  Then I realized it was for kids…  Rats.  No matter, it was all good.  We had a son I needed to occupy during the summer… PLUS, it was being run by the Guitar Union/Grosse Pointe Music Academy and that same nice Henry-guy whose ear I had talked off two years before (see “If They Build It” blog post).  Count us in!  Who knows, perhaps this RkrMom had a RkrKid… 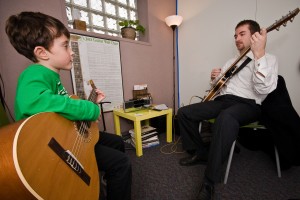 I am feeling generous today so I’m going to give you a free guitar lesson by writing this blog on how to play the guitar.  You will benefit from this whether you are trying to learn Acoustic Guitar, Electric Guitar, or Classical Guitar.  While each of these types of guitars have a different function in music, each has the same tuning therefore making them all ok to learn basic guitar playing skills on.

Being a guitar player doesn’t mean you have to be the best.  Technically speaking, there can only be one BEST player so I think it’s better to not worry about that and just focus on things that are within our control like how much you practice guitar.  Being the best is an idealistic fantasy that very few will come close to reaching.  I want all guitar students to be the best they can be, but it shouldn’t be your focus or even cross your mind.  The guitar lessons that I’m going to give here will be more of a primer lesson that will help undo preconceptions and mindless tendencies about guitar and guitar instruction.

Find a guitar that fits your budget and make sure it’s comfortable to hold.  If the guitar is new be certain to ask the store to setup and calibrate your new instrument.  If it is used then seek a professional guitar technician to setup and calibrate the guitar for you.  Don’t fall into the trap of just trying to find a beautiful LOOKING guitar.  Let’s instead focus on making the guitar SOUND beautiful.  You can reward yourself with a new guitar after learning to play at a certain level.