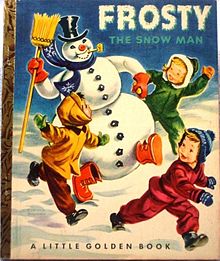 After waving goodbye to the children, Frosty the Snowman reassures them that he will be back again someday.  Did Frosty ever return as he promised?  Some people who are not satisfied with the ambiguity of “I’ll be back again someday” decided to change the lyrics to “I’ll be back again on Christmas Day”.  Is it safe to assume that if Frosty returns on Christmas day that those dreaming of a white Christmas will also be enchanted?  Perhaps it does, but perhaps Frosty is coming in from a trip out of town.  There are many other examinations that one can make about this song and what it’s all about. One thing we know for certain is that this is a very popular tune that has been covered by various artists over the years.  The list of cover artists includes The Jackson 5, The Ronettes, Bing Crosby, Nat King Cole, Ella Fitzgerald, Larry Groce, Ray Conniff, Cocteau Twins, Alvin and the Chipmunks, The Beach Boys,Leon Redbone with Dr. John, Red Foley (and his daughters), Fiona Apple, Connie Talbot (2008 and 2009), 1910 Fruitgum Company, The Partridge Family, and Jeff “Swampy” Marsh (as his character Major Monogram from Phineas and Ferb. Also sings it as Perry Saves Christmas.) and countless other musical acts (including a 2005 recording of the song by actor Burt Reynolds).  The song was written by Walter E. “Jack” Russell, who also co-wrote “Here Comes Peter Cottontail”.  The first version of the song was recorded by Gene Autry and the Cass County Boys.  Their recording made it to number 7 on the US Pop Singles Chart in 1950.

The melody to Frosty the Snowman is a basic melody that can be played on almost any instrument.  Like any simple melody, beginning music students will often learn to play this song.  Guitar players and Piano Players can easily learn the basic chord changes to accompany singers or a right hand melody.  Whether you like Christmas songs or not, they tend to serve as a valuable aid to learning vocal and instrumental music.  Most people have a strong familiarity with Christmas songs because we hear them every year from many different sources.  Learning songs that you know by ear will make learning new songs that you haven’t heard before easier.  It will also make learning more complex music easier to perform.

Let me know if anyone spots Frosty in the Grosse Pointe Village with or without a broomstick in his hand.  That would be cool if he came to our town upon his return!