“Music is a higher revelation than all wisdom and philosophy” – Ludwig van Beethoven. 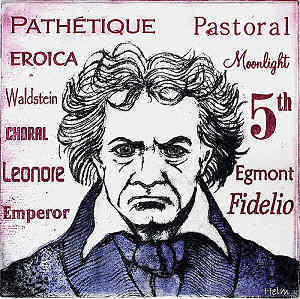 Is this a blanket statement by Beethoven or does anyone believe that this is true.  Is music actually a higher revelation than all wisdom and philosophy?  Is music a revelation at all?

Anyone born in the last 50 years or so probably has had access to music in more ways that Ludwig van Beethoven could have ever imagined.  Technology has made it possible for us to listen to virtually any song at any time.  People don’t actually need to go to a concert at all to experience music everyday and all day long.  Beethoven died in 1827 and during his time if you wanted to hear music you had to listen to yourself or somebody else play.  If music is indeed a revelation, we probably don’t look at it that way now because there is so much of it and it is taken for granted.  I can only imagine how powerful it was to see a live performance in the 1800’s and earlier.  I guess that is an experience that I will likely never realize unless I take away all my musical gadgets for a few years and never listen to radio or TV.  That’s not going to happen so I guess I can only speculate.

If Beethoven’s famous quote is the truth or even close to being true then wouldn’t that make music one of the most vital things to understand?  If wisdom and philosophy are secondary to the revelation of music then certainly there would be nobody talking about cutting music programs from our elementary schools, middle schools, or high schools.  In fact it would be a subject that requires students to learn and excel.  It would be just as important as Math, Sciences, and Language.  I personally think that music should be integrated into all subjects but that is a topic for another day.

In my own experience with music, I would say that it has been a revelation for me.  It has impacted my life in so many ways that it’s hard to quantify it’s importance.  All I can say that it has been a vitally important function in my life.  It has helped with my imagination, creativity, discipline, and so many more things.  I don’t think life would be much fun without it.  I can’t say music is a revelation, but I also cannot say that it’s not.